These small monkeys live only in the unique Atlantic Coastal Forests of Brazil, where they are endangered mostly because of habitat loss. They live in small social groups almost entirely in the trees, rarely coming down to the forest floor.

Golden lion tamarins may be seen year-round in their indoor and indoor/outdoor habitats near Base Camp Discovery. 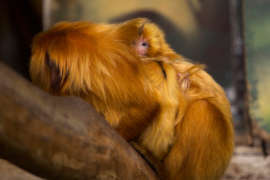 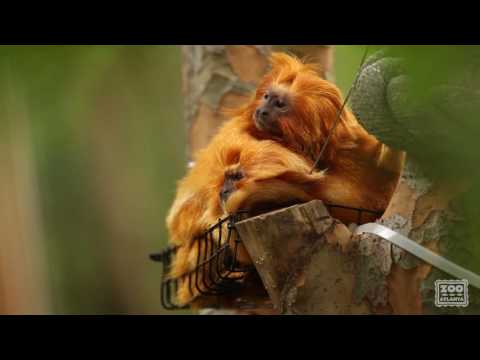 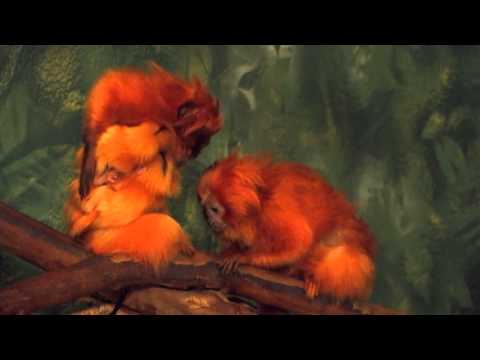 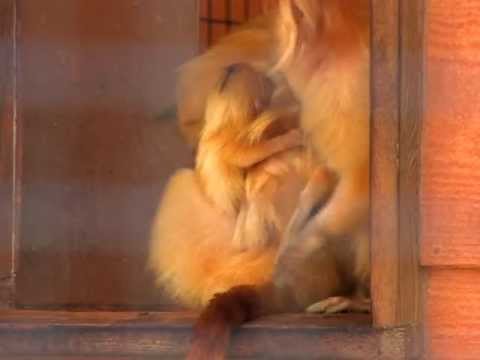 Raptors, cats, mustelids (mammals related to weasels and otters), and large snakes are the main predators of tamarins. Tamarins give alarm calls in response to strange or threatening stimuli. They have calls that are specific to aerial predators vs. terrestrial predators. These tamarins form strong pair bonds, with approximate equal dominance between the male and the female in the family group. Tamarin groups actively defend a territory averaging about 100 acres in size. They use vocalizations and scent markings during ritualized group encounters to defend their particular territories. Actual fighting rarely occurs.

Golden lion tamarins are squirrel-sized primates with characteristic bright-orange fur and a mane that frames their faces. Adults weigh about a pound and a half. They move rapidly through the trees on all fours using the vines in their habitat, which provide easy arboreal pathways and protection from aerial and terrestrial predators. In the wild, they sleep in tree holes to conserve body heat and seek protection from nocturnal predators. Tamarins scent-mark a territory by repeatedly rubbing their chests and rumps on substrates in their area. This type of marking involves glands that release an oily, musky-scented substance. Golden lion tamarins use their long, slender fingers and claws to probe into crevices to reach food objects. Males and females look alike.

In the wild, this species typically lives in family groups consisting of two to nine individuals; the average group size is six. Mated pairs are monogamous, and there usually is an adult breeding pair and one or more sets of their offspring in the group. The entire group cooperates to raise the offspring. Mothers will carry the young for the first two weeks or so, after which time the father usually carries them. These tamarins typically have twins, with each baby weighing only about 10% of mom’s body weight! Triplets and single births have been documented and, very rarely, quadruplets. Normal infant mortality rates is about 42%. Gestation lasts 126–130 days. The young are weaned between 3 and 4 months of age and become sexually mature at 18 to 24 months old. Wild tamarins usually live for about 10 years, but lifespan can be considerably longer in zoological settings.

Golden lion tamarins may be seen year-round in their indoor and indoor/outdoor habitats near Base Camp Discovery.

Golden lion tamarins live only in the Atlantic Coastal Forest (Mata Atlantica, in Portuguese), which is a coastal rainforest centered about 70 kilometers northeast of Rio de Janeiro, Brazil. Their current distribution has been reduced to only areas within Rio de Janeiro state.

These tamarins inhabit lowland coastal rain forest which have tangles of vines and bromeliads. They use the vines to travel between trees. The bromeliads attract insects and amphibians, which are an excellent source of protein and fats.

Golden lion tamarins are omnivores, eating a wide variety of fruits, insects and other invertebrates, as well as small vertebrates and bird eggs. Zoo diet includes a variety of fruits and vegetables, mealworms, crickets and commercially available marmoset chow.

Tamarins have long slender fingers for micromanipulation. This aides in digging insects out of crevices. Foraging devices are given to tamarins to elicit this natural behavior.

2nd grade
Examine the lifecycle of pollinators and discuss the important role they play in the food chain. Search for pollinators...
Read More

Bees and other pollinators are important members of our ecosystem! Zoo Atlanta is dedicated to helping protect bees, pollinators and...
Read More