In anticipation of inclement winter weather, Zoo Atlanta will be closed on Sunday, Jan. 16. This includes our IllumiNights event.

Closed Today
Before You Go >
Tickets Map Your Visit

This is one of the most distinctive animals on the planet. African elephants are the largest of the three elephant species. Elephants have many unique characteristics, and the secrets of some of their adaptations are still being discovered to this day. Elephants live long and very social lives centered around a matriarch and her offspring. The illegal killing of elephants for ivory represents a serious and pressing threat to the future of this species.

Our herd is now exploring their new outdoor environment in the all-new African Savanna. Get a behind-the-scenes look at the elephants’ care in our special observation area at the new indoor Zambezi Elephant Center. 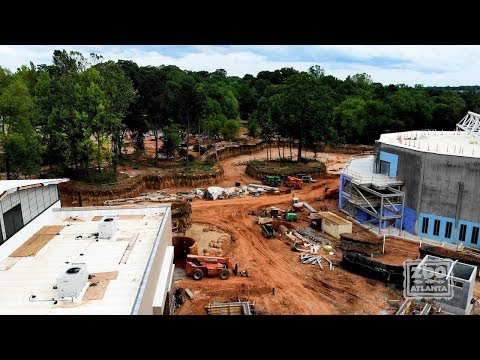 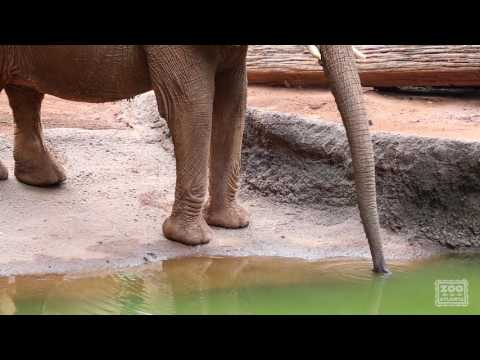 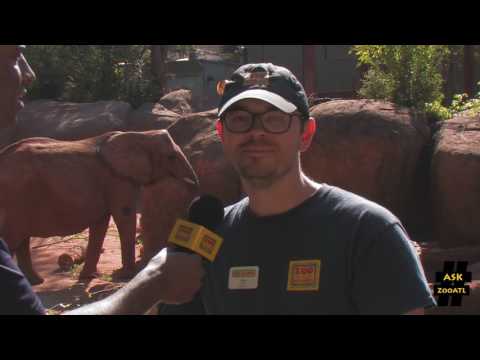 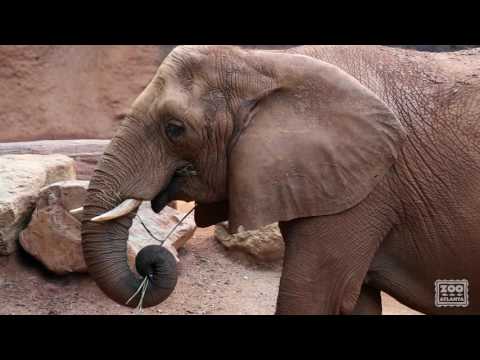 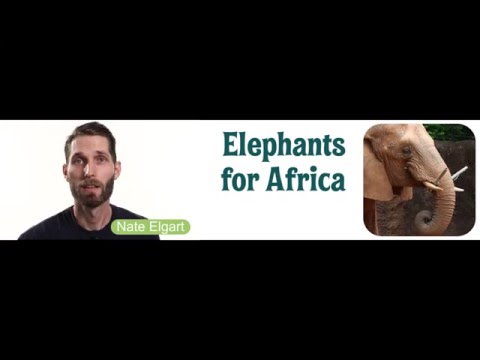 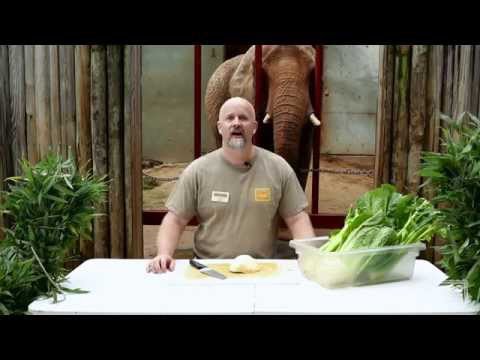 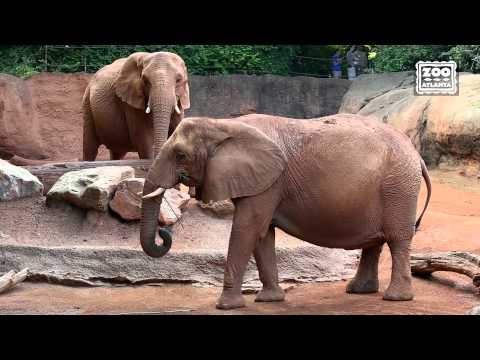 African elephants are one of only three species of the mammalian Order Proboscidea, an order that survived the extinctions of the Pleistocene era. The trunk acts as a fifth appendage unlike anything else among vertebrates and has incredible strength and finesse. Elephants live in family groups headed up by a female matriarch who spends decades imparting knowledge of their region and the subtleties of elephant social norms to other herd members. These family groups communicate with one another over long distances with low-frequency sounds carried through the soil and detected by the front feet. Elephants travel long distances seeking food and water and following seasonal rain patterns. Their diet generally consists of woody vegetation and grasses that are relatively low in calories and nutrients. As a result, their daily intake of food can be hundreds of pounds per day. Their tusks are working tools to manipulate their environment, but are also a highly-valued human commodity for the illegal ivory trade.

The new African Savanna, which opened in August 2019, introduces a new and significantly expanded African elephant habitat. The new elephant environment more than triples the size of the elephants’ former habitat and is a dynamic living space featuring elements specifically designed for elephant well-being and enrichment. Elements include Abana Pond, the largest of the complex’s three water features, a pond with 360-degree access and a gentle slope for ease of use by multiple elephants. Additional features include Chishimba Falls and Kalambo Falls, waterfalls named after falls in Africa, and a feeder enrichment activity wall.

Male African elephants can reach 14,000 pounds and 13 feet in height. Females are a bit smaller, reaching 10,000 pounds and 10 feet in height. The distinctive ears serve several functions, including their most obvious function – forming a large surface to intercept distant or faint sounds. This is the same concept as a radar dish: the larger the dish, the more sound waves it can intercept. The ears also contain many blood vessels that help regulate an elephant’s body temperature in hot conditions. The ears also serve as a visual signal to other elephants.

Sound Detection
Elephants can detect sounds over great distances, detecting these sounds with their front feet. They have large fat pads inside the bottoms of their front feet, placing their feet in solid contact with the soil. At any given time, an elephant may be sensing low-frequency sounds which are airborne or carried in the soul. Elephant vocalizations also include very low frequencies, and like whales communicating in the ocean, can communicate across miles.

The nostrils at the end of an elephant’s trunk are capable of suction strong enough to draw about 1.5 gallons of water, although elephants cannot drink through their trunks. Instead, they draw water with their trunks, squirt it into their mouths, and swallow.

Sense of Smell
In terms of their sense of smell, elephants appear to be superior to many other animals. Recent research suggests that African elephants have more than 2,000 genes dedicated to scent discrimination – that’s twice as many as dogs have, and more than five times what humans have.

Tusks and Teeth
An elephant’s tusks are actually two of its upper middle teeth. Young elephants have temporary tusks, much like human baby teeth, that fall out at around 3 years of age and are replaced by the adult tusks. The tusks grow throughout the elephant’s adult life to counter the wear and tear these tools experience.

An elephant’s only other teeth are its four massive molars, which also experience heavy wear as the animal chews abrasive woody plants and grasses. These are pushed forward as they wear down and are replaced by a new set of molars developing behind them. This can happen as many as six times in an elephant’s life. The fossil record contains many of these cast-off molars from across all the continents where the elephant’s extinct relatives, such as the mastodon, once roamed.

African elephants live longer than any other non-human land mammal, with a lifespan of 50 to 55 years. Females can begin to reproduce in their teens and in some cases may continue to reproduce into their 40s. Males typically don’t breed before they are in their early 20s or even 30s, as competition for mating can be tough.

The gestation period is also the longest of non-human land mammals at approximately 22 months. After about two years a single calf is born, weighing in between 200 and 250 pounds. Twin births are extremely rare for African elephants. In the wild, mating takes place during the rainy season so that offspring are born just prior to the rains two years, later allowing for abundant resources to support a nursing mother. Infant elephants will nurse for six to 18 months, but some calves may try to nurse for well over five years.

The trunk of a newborn elephant doesn’t have any muscle tone, so newborn elephants will nurse with their mouths and not their trunks. It takes several months to a year for a calf to gain full control over its trunk and be able to use it purposefully. Male elephants will leave their natal groups as they near sexual maturity and may become part of a more fluid all-male herd.

Social Behavior and Intelligence
Elephant families, or herds, comprise a few to over 100 individuals, some biologically related and some not. The herd is led by the oldest female, called a matriarch. Males typically leave the herd between the ages of 12-15 at which time they often form small bachelor groups with other males.

African elephants are very intelligent and have demonstrated advanced memory capabilities. This memory is what aids the matriarch in locating food and water each season, especially during the dry seasons when the herd may need to be led for longer distances to find abundant resources. With the additional conservation challenges of habitat loss and fragmentation, poaching, and climate change, water and food are harder to find and require memories of watering holes from long ago. When matriarchs are poached it becomes the responsibility of the next oldest to lead the group, and these younger females may not possess memories old enough to find important resources for group survival. In addition to the cognitive capacity for extensive memory, elephants also exhibit behaviors of grief or mourning, anger, and play.

Our herd is now exploring their new outdoor environment in the all-new African Savanna. Get a behind-the-scenes look at the elephants’ care in our special observation area at the new indoor Zambezi Elephant Center.

African elephants once ranged across most of sub-Saharan Africa. Human developments and population sizes in the last century have now restricted elephants to populations that are socially and genetically isolated in game reserves and national parks, and they are now extinct in several countries where they once were common.

Across sub-Saharan Africa, these elephants use a variety of seasonally dry savannas and sparse woodlands. They can be found in relatively dense thorn scrub habitat and even in deserts, but this species does not occur in rainforests. Seasonal migrations to flooded grasslands and deltas during the wet season is a crucial part of the annual cycle of some populations.

Elephants are non-ruminating herbivores. Unlike ruminant animals such as cows, which have several phases of digestion, elephants process their food in only a single-pass through, meaning that they must consume large quantities of food. An African elephant may eat 200 to 300 pounds of food a day, mostly in the form of grasses supplemented by bark, leaves, twigs, roots and some fruits, seeds and flowers. Elephants may also drink 20 to 30 gallons of water a day.

At Zoo Atlanta, the elephants are fed hay, grain and browse pruned from a variety of non-toxic trees and shrubs around the Zoo. They also receive fruit and vegetable treats such as apples, carrots, sweet potatoes and romaine lettuce.

The recent escalation of large-scale organized crime syndicates poaching elephants for ivory is changing the dynamic of the landscape in Africa, suddenly and dramatically introducing the possibility of a world without African elephants. This illegal trade functions on a global scale, and the U.S. remains one of the world’s largest importers of ivory.

Many elephant populations also exist in close proximity to human populations who rely on agriculture and natural resources for their livelihoods, making human-animal conflict another major threat for elephants when animals are persecuted by humans for exploiting crops.

In 2018, Zoo Atlanta announced a partnership with Conservation South Luangwa, a nonprofit organization based in Zambia, to protect African elephants and other wildlife impacted by illegal wildlife trade and human-wildlife conflict. Conservation South Luangwa works to identify and prevent illegal wildlife trade using anti-poaching patrols, aerial surveillance and detection dogs trained to find ivory, animal skins, ammunition and firearms, and certain species killed for bushmeat. More than half the people inhabiting this region of Zambia make a living from agriculture and natural resources, making human-animal conflict a major threat for African elephants and other wildlife when animals are persecuted by humans for exploiting crops. Conservation South Luangwa also has a strong focus on mitigating these conflicts by working directly with local people to safeguard their crops and livelihoods while engaging them as advocates for conservation.

Zoo Atlanta is also a proud partner of the Wildlife Conservation Society’s 96 Elephants campaign and has supported Elephants for Africa through the Quarters for Conservation program.

Our research staff are involved in a variety of non-invasive behavioral studies to discover even more about the fascinating lives of African elephants.

Msholo is the only male elephant living at Zoo Atlanta and is easily identifiable as the largest of the three...
Read More

This World Elephant Day, join the herd and learn how to protect elephants in the wild.
Read More

No creature looms larger over the savanna than the African elephant, and you’ll agree when you come face-to-trunk with one...
Read More