Black-and-white-ruffed lemurs are the largest of the lemurs, all of which are found only on the island of Madagascar. They are herbivores, primarily feeding on leaves, shoots, flowers and fruits. These lemurs typically live in the middle to upper part of the rainforest. Vocalizations and scent-marking are known methods of communication for these social primates.

Black and white ruffed lemurs are mostly active during the day. However, they are most active in the morning and late afternoon. 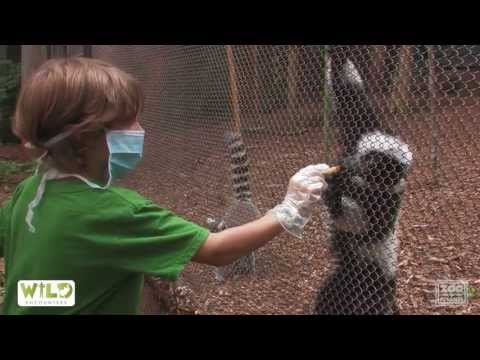 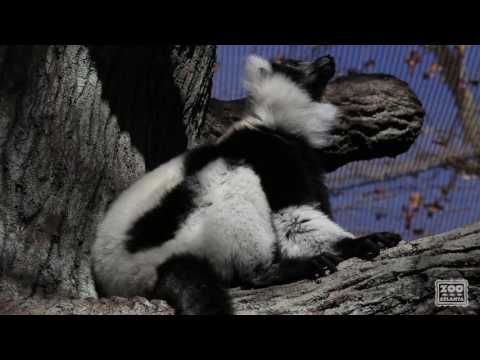 Approximately 40 million years ago, the ancestors of modern lemurs arrived from mainland Africa, possibly rafting on trees flowing out of mainland rivers. Lemurs then evolved in isolation on the island, and now there are 40 different species. At least 17 species are now considered extinct, and the rest are endangered. Extinction of lemur species poses problems for Madagascar’s plant life, as some of the fruiting plants there rely on certain species of lemurs to disperse their seeds. As a result, several plant species now are “orphaned.” There are two subspecies of ruffed lemurs, red-ruffed and black-and-white-ruffed. The two subspecies are similar in shape, size and behavior. Their coloring and location in Madagascar are their major differences.

Ruffed lemurs are the largest living members of the lemur family. They can weigh between 8 and 11 pounds, and their tails are about 2 feet long. Despite the length of a lemur’s tail, it is not prehensile. Their tail is primarily used for balance while they are climbing trees. Males and females are not sexually dimorphic; they look the same. Their distinctive golden eyes have some stereoscopic vision but individuals vary with respect to their ability to see color; some can see colors as we do, and some individuals cannot. This genetic variation is well-known among many non-human primates.

Lemurs are well adapted for life in the trees thanks to their grasping fingers and toes, including semi-opposable thumbs on the hands. They have the ability to hang upside from their feet. Lemurs spend most of the day feeding, traveling, grooming, and resting. This species uses different calls to communicate, signaling their presence, displaying dominance, or sounding an alarm call. They are also known to use scent as a form of communication, marking their territory by rubbing their bodies on branches to let others know they were there.

Black-and-white-ruffed lemurs live in groups ranging from a single pair and their offspring to groups of 8 to 16 individuals, including adults of both sexes. Females can generally begin reproducing around 20 months of age. Breeding is seasonal and occurs from May to July.

Before giving birth, the female builds a nest of leaves and twigs high in the trees. She may even use fur from her own flanks to line the nest. Gestation may last up to three months. Up to six offspring are possible, but twins and triplets are most common. Unlike other lemur species with one pair of mammary glands, ruffed lemurs have three pairs (six teats), allowing them to nurse their offspring all at once. Young stay in the nest for about three weeks, but the mother may move the nest several times and may also build nests on the ground. She carries the young in her mouth, as they are unable to cling to her back or stomach like most primate offspring.

Black and white ruffed lemurs are mostly active during the day. However, they are most active in the morning and late afternoon.

Middle to upper canopy of the rainforest; groups often utilize the tallest trees with the largest trunks to support a larger group.

Black-and-white-ruffed lemurs eat primarily plants and fruits. They are known to forage for their food in the treetops, searching for fruit, leaves, flowers, nectar, seeds and, on rare occasions, animal matter. At Zoo Atlanta, we offer them vitamin-rich browse biscuits, vegetables, including greens, cabbage, yellow squash, carrots, celery, cucumber and broccoli, and fruits such as apple, pear, banana, grapes, mango and melon.

The Living Treehouse habitat is filled with large trees, simulating their habitat on the island of Madagascar. Various enrichment devices, such as swing poles, rings, and ropes, are scattered throughout, providing stimulation.

Many lemur species are on the brink of extinction. With 91 percent of all lemur species and subspecies classified as Critically Endangered, Endangered or Vulnerable on the International Union for the Conservation of Nature (IUCN) Red List of Threatened Species, lemurs are the most threatened group of mammals worldwide.

Madagascar, the only place in the world where lemurs are found, is home to 110 species of lemurs and is a global hotspot of biodiversity. Only 10 percent of Madagascar’s land area remains as suitable primate habitat. Lemurs are threatened by habitat loss and deforestation, and they could be extinct in 20 years without targeted conservation efforts.

Born at Zoo Atlanta, but named after a national park in Madagascar. She has a very dark face and her eyes are...
Read More

There is a cool, crisp feeling in the air as October has finally rolled around and everyone is getting ready...
Read More

Returns April 1! Meet and feed some of the amazing primates that make the island of Madagascar one of Earth's...
Read More