The word “orangutan” comes from “Orang Hutan,” meaning “Person of the Forest.” They are unique among the great apes in that they do not live in social groups. Adults typically forage on their own, but mothers care for their offspring for years. Orangutans have complex cognitive and spatial skills, meaning that they have good memories and are outstanding problem-solvers. Orangutans are highly endangered as a result of habitat loss and black market trade for infants as pets. There are three species of orangutans: Bornean, Sumatran, Tapanuli (recently discovered, Tapanuliensis). Morphologically, the Tapanuli species has differing skull and teeth structure. They are found in an isolated area of the northern part of the island of Sumatra. There are fewer than 800 individuals making them among the most endangered great apes. 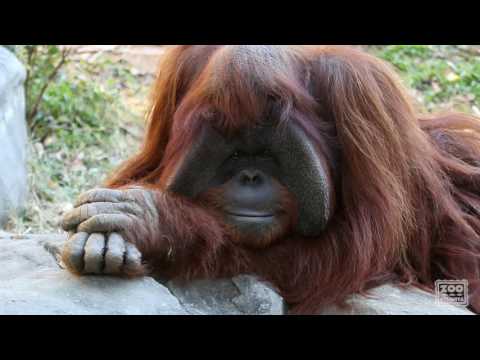 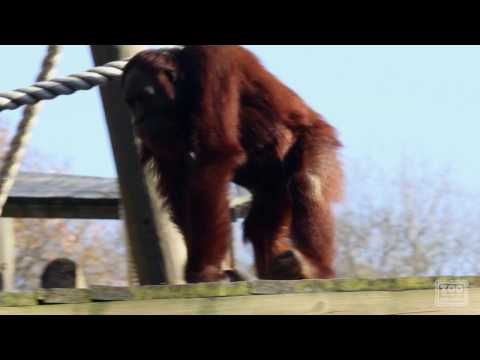 Orangutans are the only apes that do not live in large social groups. This behavior is associated with their diet, primarily of fruit, as a large social or family group would deplete the usually sources of fruit in any given area. When there is an abundance of food, such as a concentrated area of fruiting trees, females and juveniles may gather into social groups to take advantage of the resource. Orangutans display remarkable cognitive skills. In the wild, a mature, experienced orangutan will have a seasonally adjusted map of their area committed to memory to use as a guide to specific trees that should be fruiting at various times. Orangutans are adept at puzzles, situations, or challenges that involve recognition and matching of objects (including people), sequencing, or memorization. They also are known for their use of simple tools. Most people are familiar with studies that show chimpanzees using tools such as sticks to find termites for food. Recent studies have also shown that orangutans occasionally use tools when foraging for food. When working with the orangutans, the keepers use positive reinforcement to reinforce completed tasks (i.e. fruit or biscuits). The orangutans at Zoo Atlanta currently use touch-screen computer monitors to participate voluntarily in cognitive research. Keepers work with orangutans in a protected contact environment meaning we never share the same space at the same time. Orangutans are playful, gentle apes, but they are very strong and could unintentionally injure a human. We shift them from their night areas to their outdoor habitats once these areas are prepped and secure.

There are distinct differences between the two species of orangutans. The Bornean orangutan has darker skin and hair, and the males have larger, fleshier cheek (flange) pads, a larger laryngeal sac and a more square-shaped face. The Sumatran males have smaller features relative to Bornean orangutans, and both males and females develop a ginger-colored beard and a diamond- shaped face.

Fully developed males weigh 200 to 250 pounds and average 54 inches tall. Fully developed females weigh around 80 to 120 pounds and average 45 inches tall. Orangutans have an arm span of approximately 8 to 9 feet. Their arms are twice as long as their legs, and their hips and legs are as flexible as their shoulders and arms. They have long, hook-like hands and feet and opposable thumbs on their feet, which functionally make them four-handed.

Lifestyle
Orangutans have adapted to arboreal life in the trees. They use a three-limb contact method called semibrachiation to travel with ease through the trees. Each night, they build nests, constructed from branches and leaves, built 40 to 60 feet up in a tree.

Males have a pendulous laryngeal sac that, when inflated, increases the vibration tones of the voice to produce a guttural “long call” (similar to a loud roar). The long call plays an important role in keeping away other males and attracting females.

Adult males avoid or display aggressive behavior toward other adult males encroaching on territory. Males will often defend their territories by patrolling the area and vocalizing with long calls to keep other males away.

Reproduction
Males become sexually mature and fully grown at approximately 15 years of age; however, their cheek pads may not become fully developed until 20 years of age.

Females begin puberty when they are between 6 and 9 years old. They typically reach sexual maturity and full growth at approximately 12 to 15 years of age, although they usually will not have their first offspring until 14 to 16 years of age. Gestation lasts approximately 8.5 months, and newborns typically weigh 3 to 4 pounds.

Orangutans give birth in intervals of approximately seven or more years (the longest interval between births of any ape). Twin births are uncommon. Males do not take part in parental care but are tolerant of and playful with youngsters in zoological settings. Young orangutans have a relatively long childhood of about eight years; in fact, orangutans have the longest dependent childhood of any terrestrial mammal with the exception of humans. Young males stay in close proximity to their mothers for approximately eight years, while females may remain with their mothers into their teens.

Orangutans generally can live 25 to 30 in the wild and may live up to 50-60 years in zoological settings.

A large portion of an orangutan’s day (60% or more) is devoted to foraging for and eating food. As large-bodied fruit-eaters, orangutans must locate and consume large quantities of food daily. Because fruit is typically a scarce and scattered resource (as compared to the grasses consumed by other apes like chimpanzees and gorillas), orangutans must travel large distances and devote substantial time to foraging. In the wild, they are known to eat up to 300 or more species of fruit, in addition to leaves, bark, shoots and flowers. At Zoo Atlanta, we offer the orangutans vegetables such as lettuce, cabbage, carrots, broccoli, green beans and cauliflower; fruits, including oranges, apples, bananas and kiwi; browse (edible vegetation) that includes bamboo, mulberry, banana leaves, elm and eleagnus. In addition, they receive a biscuit diet that supplements the produce. The biscuits contain many of the vitamins, nutrients and protein that they would receive from their wild diet.

On a daily basis, animal care professionals, along with our Volunteer Enrichment Team, provide enrichment for the orangutans. The keepers offer the orangutans enrichment several times a day to encourage natural behaviors and keep the orangutans environment as dynamic as possible, including poster tubes filled with shredded newspaper and trail mix, magazines and burlap bags.

An enrichment program was also created by the care team that incorporates the use of a computer. This program allows the orangutans to use their problem-solving skills to complete specific tasks. The keepers and researchers believe that the program is not only stimulating for the orangutans, but it also increases the public’s awareness of orangutan intelligence. In an unpredictable wild environment, orangutans are required to use their cognitive skills.

Madu serves an important role in the survival of her species by serving as an orangutan foster mother. Madu has...
Read More

Celebrating birthdays behind the scenes

Hello everyone! Last week was a busy one for Team B in the Primate Department as we celebrated FIVE birthdays!...
Read More

Chantek had a unique and engaging personality and special ways of relating to and communicating with those who knew him...
Read More