These easily recognizable creatures are native to middle and southern Africa. They are some of the largest land-dwelling mammals in the world, reaching weights of up to 6,000 pounds. Like other rhino species, white rhinos are heavily poached for their horns. Powdered horn is used in traditional Asian medicine, supposedly curing a range of illnesses from fevers to cancer. Uncontrolled hunting in the colonial era was historically the major factor in the decline of white rhinos; however, hundreds of white rhinos are poached annually. They are particularly vulnerable to hunting due to their unaggressive nature and their occurrence in herds.

Look for Mumbles and Kiazi in the outdoor habitat at the rhino complex. If you don’t see them in the habitat, you can also check them out through the viewing windows of their indoor building. 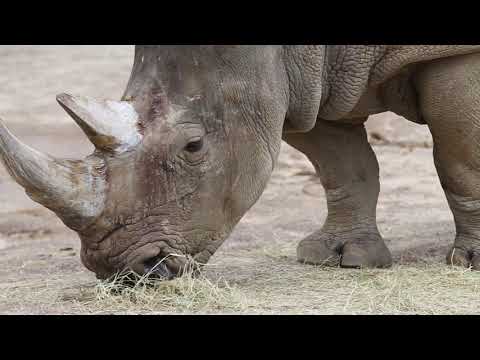 The southern white rhino is among the most recognizable of all of Africa’s large mammals, standing up to 6 feet tall at the shoulder and weighing up to 6,000 pounds. White rhinos are distinguished from black rhinos by their size and by the shape of their upper lip. The “white” aspect of the name comes from an Afrikaans word meaning “wide.”

White rhinos use their broad, square upper lips to graze on savanna grasses, while black rhinos use their pointed upper lips to browse on leaves from trees and shrubs. White rhinos can also be distinguished from black rhinos by their longer skulls, less sharply-defined foreheads, and more pronounced shoulder humps. Both black and white rhinos have two horns. The front horn is longer and averages 35 inches in length, but may grow as long as 60 inches.

White rhinos are considered the most social of all the rhinos. Offspring usually stay with their mothers until the next calf is born. Larger, temporary groups of 14 or more individuals are often seen, usually made up of immature individuals or mothers without calves. Dominant males are typically solitary and occupy smaller ranges than females do.

Territories are often marked by spraying urine, spreading dung, foot-dragging and horn-scraping. While dominant males will tolerate females and sub-adult males in their territory, invading bulls will be challenged. Actual fights are rare, however, and confrontations usually consist of horn-butting, false charges and other displays.

Breeding occurs year-round, with courtship and mating periods lasting one to three weeks. Gestation is approximately 16 months. Rhinos give birth to a single calf, and calves are usually weaned when they are 1 to 2 years old. The usual interval between births is two to three years. Females usually begin to breed at 6 years old; males, at 10 to 12 years old. Rhinos can live 40 to 50 years.

Look for Mumbles and Kiazi in the outdoor habitat at the rhino complex. If you don’t see them in the habitat, you can also check them out through the viewing windows of their indoor building.

White rhinos are known for their flat, wide upper lips. These are integral parts of their feeding adaptations, since they enable the animals to graze on short grasses. These flat lips allow the rhinos to get low to the ground and consume the grasses with ease. Because of this ability, white rhinos are pure grazers in the wild.

The northern subspecies of white rhino only has two individuals remaining today, making their population functionally extinct. The southern white rhino, however, is considered a conservation success story. Considered extinct for much of the late 19th century, a small population was discovered in southern Africa in 1895. A century of conservation efforts followed, and there are now an estimated 20,000 individuals in the wild today.

Mumbles is the first southern white rhinoceros ever to live at Zoo Atlanta. He moved here in May of 2020...
Read More

What’s in a rhino horn?

Many of you already know that last year, our southern white rhinoceros Mumbles got a new companion! Kiazi arrived from...
Read More