Zebras are among the most recognizable of all animals, with their distinctive striped color pattern. They are closely related to our domestic horses.

Be on the lookout for Shinda in their new habitat in the African Savanna. 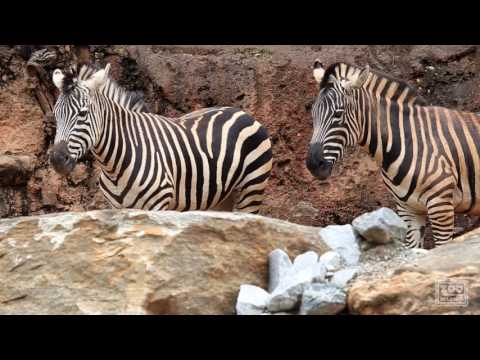 Zebra species include the Grevy's zebra (E. grevyi), the plains zebra (E. quagga), and the mountain zebra (Equus zebra). Family groups may join with other herds to form huge groups numbering in the thousands. Social bonding within large herds allows for greater protection; herds look more intimidating than individuals. Lions are the zebra's chief predator; however, the zebra's most devastating enemy is man. A zebra's best protection is to run from a predator, at speeds of up to 40 miles per hour. It will use its hooves to lash out and is able to kick with expert marksmanship when threatened. Their primary predators include lions, cheetahs and leopards. There are many theories to why zebras have stripes. These may be used for camouflage as disruptive coloration, hiding their silhouettes among grasses, or for identification. The patterns are like fingerprints: no two are the same. The stripes may also keep disease-carrying flies away because it is difficult for them to see the zebra.

Zebras are a species of horse and are thus closely related to our domesticated horses. They are characterized by the distinctive striped patterns in black and white, and they have short, stiff manes. Plains zebras are distinguished from the other species by broad stripes that extend around the belly and down to the hoof. An adult male zebra, or stallion, is about five feet long; females, or mares, are slightly smaller. An average adult female weighs 600 to 750 pounds.

Zebras have sharp, specialized incisor teeth to easily cut the grass that they eat. They are odd-toed ungulates and walk on the tips of their toes. Like their relatives, zebras are not ruminant ungulates, so they must take in a lot of food to get adequate nutrients in their diet. Zebras need to drink daily, and thus they are restricted to habitats where water can be accessed within half a day’s walk. Zebras are active both day and night, with their activities often being determined by their distance to a water source.

Zebras live in family groups composed of five to 20 individuals, with one adult male, several females and their young. Mares form groups and associate with a single stallion, who protects them from harassment by other males – a benefit to females because it allows them to spend more time foraging.

Juvenile males (colts) and juvenile females (fillies) reach sexual maturity at about 16 to 22 months of age, but males do not begin competing for females until they are around 4 years old.

The zebra gestation period is about one year, and one foal is produced at a time. Born with shaggy fur and brownish stripes, newborn foals can stand within 15 minutes of birth and begin nursing within an hour. Foals may begin grazing within a week of birth but may nurse for seven to 16 months.

Fillies remain in the herd until they are sexually mature. Colts leave their family herd when they are 2 to 3 years old to join a bachelor herd before they are old enough to compete for females.

Wild zebras live about 20 years, and zebras in zoos may live an additional five to 10 years.

Be on the lookout for Shinda in their new habitat in the African Savanna.

Southeastern Africa, with the greatest concentrations being in Kenya and Tanzania.

Open grasslands and savannas, often mixing with herds of other browsing or grazing animals such as giraffes or wildebeests.

Zebras are grazers, and their grazing tends to promote new growth of grass. They usually are the first species to arrive to a new grazing area, feeding on the coarser top grass and leaving the tender stems, leaves and growing shoots for other grazers. At the Zoo, we offer them Bermuda hay, grains and Equi-Aid (prevents impaction), as well as salt and minerals.

It’s all in the temperature

This time of year, the members of the Hoofstock Team can tell you what the temperature is at any moment,...
Read More

Meet and talk to one of the team members dedicated to the care of the zebras at the Zoo.
Read More