Panamanian golden frogs are native only to central Panama, where they have been viewed as symbols of good luck for centuries. Unfortunately, an epidemic of chytrid, a fungus highly dangerous to amphibians, has eliminated their populations, and the Panamanian golden frog is considered extinct in the wild. Their species is now maintained in carefully managed survival-assurance breeding groups at facilities in Panama and in the U.S., including Zoo Atlanta.

The Panamanian golden frogs can be seen virtually anytime in Scaly Slimy Spectacular. While many frog species are secretive and nocturnal, the Panamanian golden frog is the opposite, so on any given day, you are very likely to see these brightly-colored frogs walking about. Be sure to also check in the water to see if there are any tadpoles. The tadpoles are tiny and whitish with gold flecks and are usually found clinging to underwater surfaces with their specialized sucker-shaped mouths. 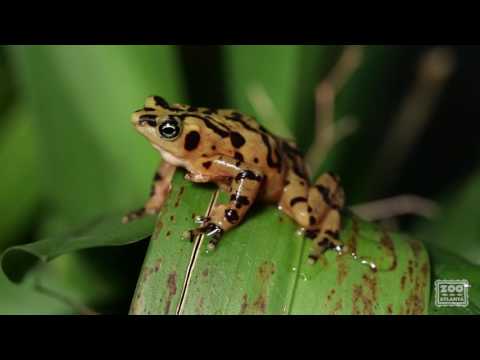 The Panamanian golden frog is a real cultural emblem for the nation of Panama, with its likeness appearing in every sort of art, folklore and cultural context. Being associated with good fortune, the frogs frequently appear on items such as lottery tickets, T-shirts and art. Wild populations were eradicated by the amphibian chytrid fungus with the last wild Panamanian golden frog seen in 2009. The future of this species is now reliant on an Association of Zoos and Aquariums (AZA) Species Survival Plan®(SSP) programs across many zoos in the U.S. and partner facilities in Panama. This species has a somewhat unusual biology in that the tadpoles develop in fast-flowing mountain streams, rather than in ponds, and the males defend their territories and attract mates by waving their hands and feet rather than by vocalizing. As their brightly colored pattern might suggest, this species is highly poisonous, but not at all harmful to humans.

No two individuals of these boldly patterned frogs are the same, so it is easy for our staff to identify and track the health of each individual frog. That is very difficult to do with many species of amphibians. As is often the case in nature, brilliant colors are a warning signal to potential predators to avoid these poisonous frogs. A few snake species, however, have evolved resistance to this particular toxin and thus are one of their few predators. These frogs are harmless to humans, but you would be very uncomfortable if you foolishly put one in your mouth.

These frogs wander across the leaf litter in the forest most of the year, but move toward clear, swiftly-flowing streams to reproduce. The eggs are deposited in the stream and the tiny tadpoles develop there. The mouthparts of the tadpoles are specialized to serve both as a scraper to remove organic matter off of submerged rocks and logs and also as a suction device to keep them in place in the swift flowing water.

While we usually associate frog reproduction with the male frogs vocalizing to call females to the breeding site, these frogs produce very low calls that don’t carry very far over the sound of rushing water. What is a frog to do if the rushing water of the stream is louder than its ability to call? These frogs use a visual signaling technique called semaphoring in which the males make exaggerated waving motions with their hands and feet to attract females and dissuade rival males. Watch for this distinctive behavior from the frogs in Zoo Atlanta’s survival-assurance breeding group.

The Panamanian golden frogs can be seen virtually anytime in Scaly Slimy Spectacular. While many frog species are secretive and nocturnal, the Panamanian golden frog is the opposite, so on any given day, you are very likely to see these brightly-colored frogs walking about. Be sure to also check in the water to see if there are any tadpoles. The tadpoles are tiny and whitish with gold flecks and are usually found clinging to underwater surfaces with their specialized sucker-shaped mouths.

This species occurs only in a relatively small area on the lower slopes of the mountains in Central Panama.

This species is most commonly associated with forests that lie in the transition zone from lower elevation rainforest to higher elevation cloud forest. In any case, they require undisturbed native forest with a thick layer of leaf litter on the ground for foraging for tiny insects and other invertebrates. They also rely on nearby unpolluted streams for reproduction.

Wild diet includes tiny insects and other invertebrates such as chiggers, worms or springtails. Zoo Atlanta’s Herpetology Team maintains breeding colonies of a wide variety of such invertebrates, including fruit flies, crickets, beetles and others to ensure that these important frogs have the greatest breadth of diet possible. Their food items also are dusted with specially developed vitamin and mineral powders. Watch carefully during your next visit to the Zoo, and you may see them ingest the tiny, nearly invisible little creatures we provide for them.

Zoo Atlanta is an active member in the Panamanian Golden Frog SSP [http://saveamphibians.org/panamanian-golden-frog] which includes the animals here at the Zoo. Zoo Atlanta also contributes financially and donates staff time and other resources to the multinational Project Golden Frog [http://projectgoldenfrog.org]. Our amphibian conservation efforts also extend globally, as the Zoo is one of the founding institutions of the Amphibian Ark program [http://www.amphibianark.org]. We also work here in Georgia to buffer our native amphibians from regional conservation threats, including monitoring wild populations for emerging infectious diseases [link].

Zoo Atlanta staff has been heavily involved in the basic research necessary to understand the causes, effects and pathways of epidemics of amphibian chytridiomycosis across all of Mesoamerica, including documenting the 2006 epidemic that eliminated the last known population of the Panamanian golden frog [http://journals.plos.org/plosbiology/article?id=10.1371/journal.pbio.0060072]. This research has been necessary to better understand this disease and, hopefully, to find a solution to these epidemics in the wild.

EXTINCT IN THE WILD

Many experts believe golden frogs are extinct in the wild. Zoo Atlanta supports Project Golden Frog and is one of...
Read More