Like all vultures and condors, these large birds are scavengers on carcasses. They soar over large areas searching for food using vision and scent, and when a carcass is found, many individuals may congregate upon it. After centuries of suffering relatively few conservation challenges, vultures in many areas are facing sudden and dramatic declines as a result of new threats caused by human activities.

These vultures may be seen on all but the coldest Atlanta winter days, when they prefer to remain in their covered hutch that is part of their habitat. 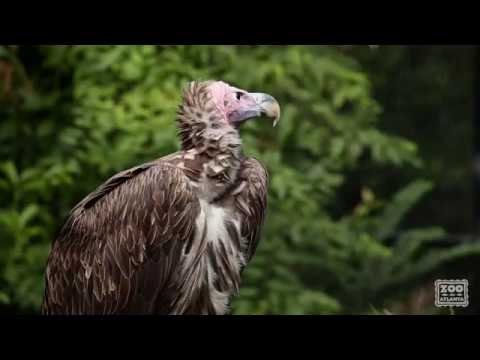 These are the largest vultures in Africa, where native vulture species can be broadly classified into categories by size. According to these categories, the vulture species are somewhat specialized on how and when they feed from a carcass. In general, larger species such as the lappet-faced vulture arrive first and use their strength and robust beaks to break through the tough hide of the animal and feed upon the larger superficial muscles and organs. Eventually, the smaller species maneuver into what remains of the carcass to get the bits remaining, for example, inside the rib cage. Most birds are believed to have relatively poorly-developed senses of smell, but vultures clearly use scent as a primary means of locating decaying carcasses over very large areas. They also use vision to scan the landscape and watch for circling congregations of other vultures, indicating a nearby carcass has been located.

Lappet-faced vultures have some downy hair on their heads, distinguishing them from many vulture species which have bald, featherless, heads. Vultures allow their metabolism, and thus their body temperature, to drop at night while sleeping. This reduces calories burned to keep body temperatures up when the bird is inactive. The bald head is an adaptation for raising the body temperature of the bird—and especially in the crucial brain organ—soon after sunrise. The same feathers that can insulate against loss of body heat also act to block gains of heat from the environment.

The familiar behavior of vultures perching with their wings outstretched is part of the same phenomenon. Outstretched wings add surface area, as in solar panels, to increase absorption of heat from the sun. Vultures literally bask in the sun just like lizards or crocodiles, and for the same reason. The ability to save calories while inactive overnight would be important for scavengers who cannot predict when their next meal may appear. On very warm days, the bald head and outstretched wings can work in the opposite way by helping the bird lose excess body heat.

Another characteristic of vultures is their use of thermal drafts. Vultures patiently soar in circles, allowing the rising column of air to flow upward. This allows them to rise to great altitudes, scanning the broadest horizon for carcasses, without expending any energy flapping their wings. Other birds are known to do this as well, but vultures are exceptionally adept at it.

Lappet-faced vultures are known to remain as a mated pair for at least several years, perhaps switching partners after their first or second year as adults. It is unknown if these pair bonds last for life, nor is it known what happens if one of the mated pair dies. Nests are simple, with a loose nest of sticks on an elevated cliff or tree. A single egg is produced, and both parents help feed, protect, and care for the chick. Individuals may reach 50 years of age.

These vultures may be seen on all but the coldest Atlanta winter days, when they prefer to remain in their covered hutch that is part of their habitat.

Sub-Saharan Africa and the Arabian Peninsula

Any carcass in the wild will attract these birds, although their great size makes the smallest carcasses a bit difficult to manage. They have occasionally been seen hopping after small live animals on the ground or raiding bird nests for eggs. Their feet, however, are not adapted for grabbing animals while in flight. Zoo diet includes mice, chicks, quail or rabbits.

Maintaining these birds outside in Atlanta gives them exposure to a variety of temperatures and weather, encouraging them to use their natural basking behaviors to control their own body temperature. Occasionally, they are given large portions of meat, such as a rack of beef ribs, to encourage their natural behavior of tugging meat from a carcass.

Hi, I’m Christina, Lead Keeper in Ambassador Animals and the Quarters for Conservation Champion for Vulpro, one of the three organizations benefiting...
Read More

Join a bird expert for facts on nature’s cleanup crew and be there for the vultures' afternoon feeding!
Read More