Giant pandas are very unusual animals that eat almost exclusively bamboo, which is very low in nutrients. Because of this, they have many unique adaptations for their low-energy lifestyle. Giant pandas are solitary, with males and females coming together only briefly to mate. Habitat loss is the primary threat to this species. Its popularity around the world has helped the giant panda become the focus of successful conservation programs.

The giant pandas may be seen year-round at virtually any time of day. Because they are native to high-elevation cool mountain forests, in the warmer months they will generally be in their climate-controlled dayroom habitats. In the cooler months here in Atlanta, they may be either indoors or in their outdoor habitats. And, of course, panda fans all around the world can watch them on PandaCam. 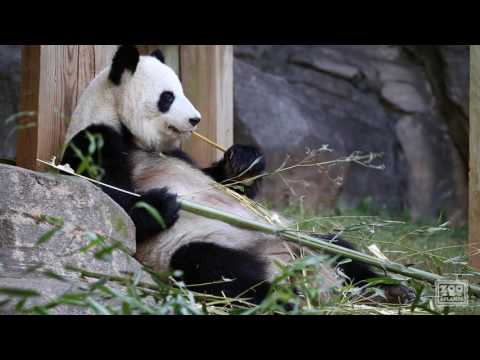 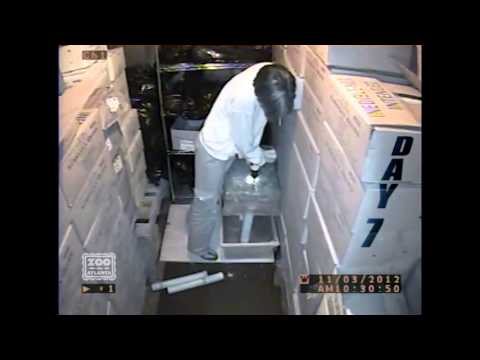 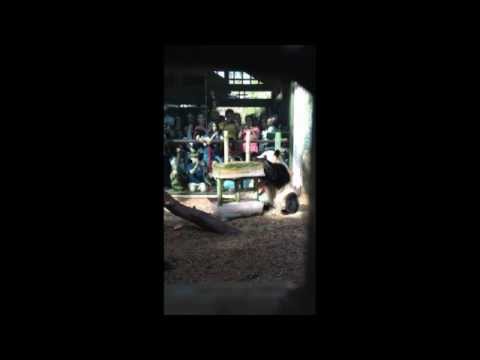 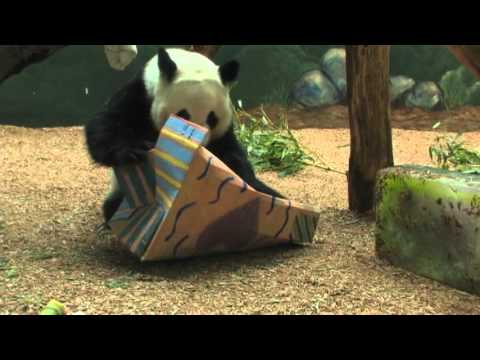 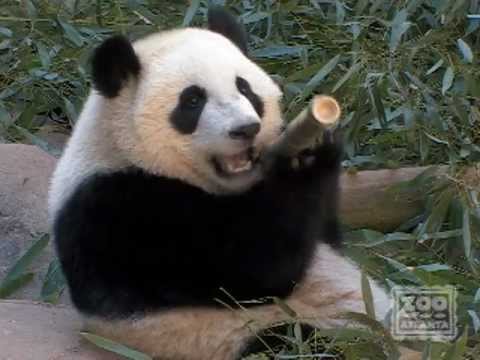 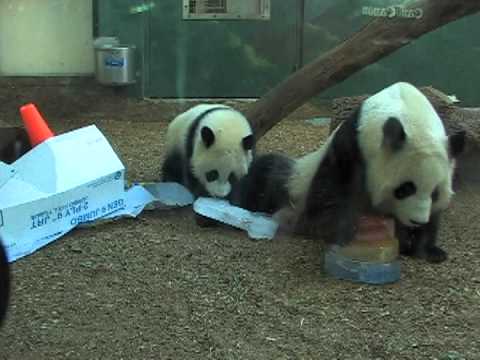 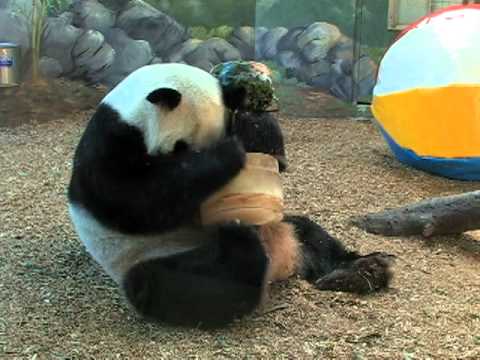 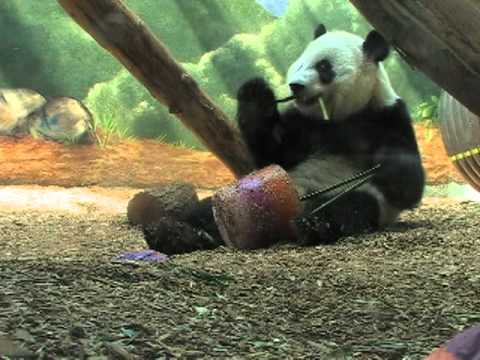 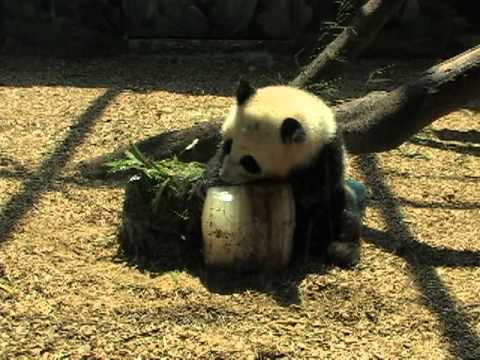 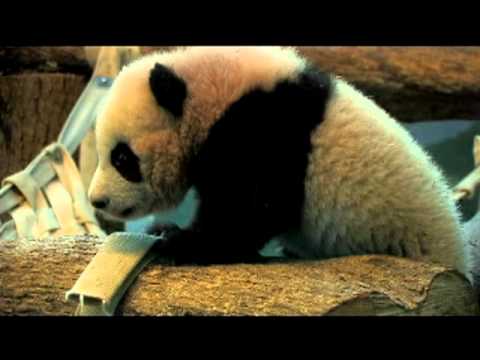 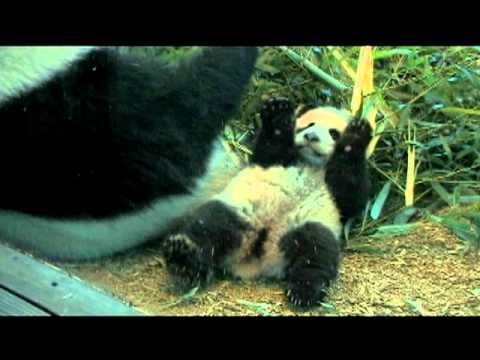 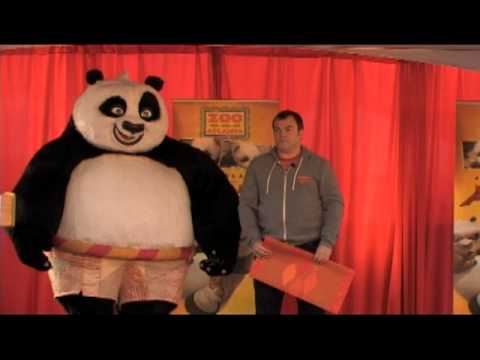 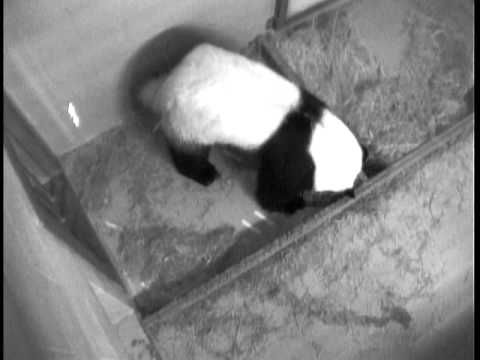 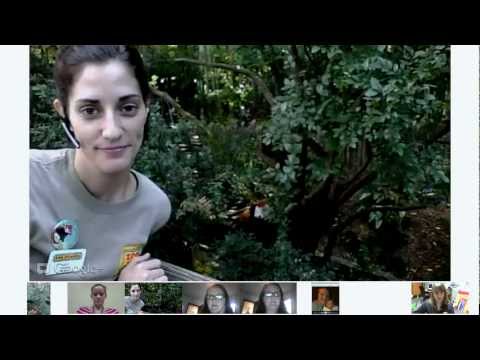 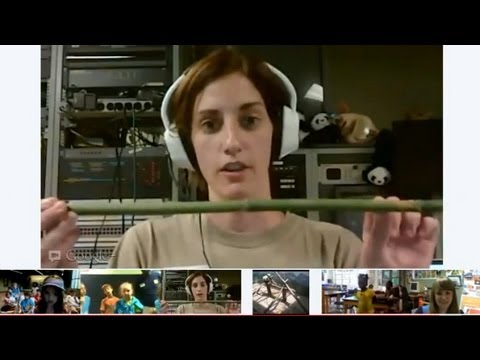 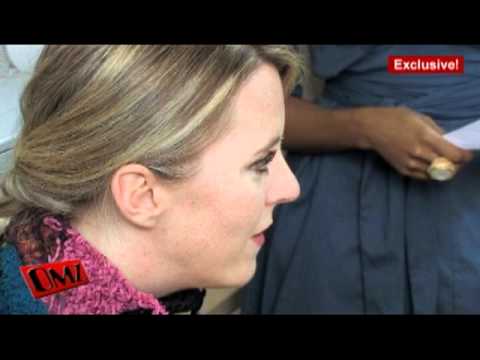 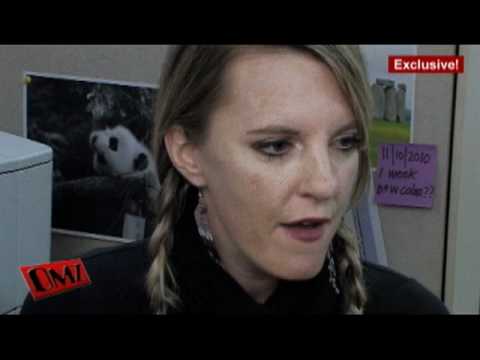 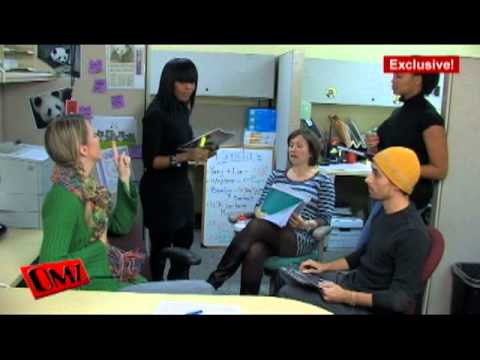 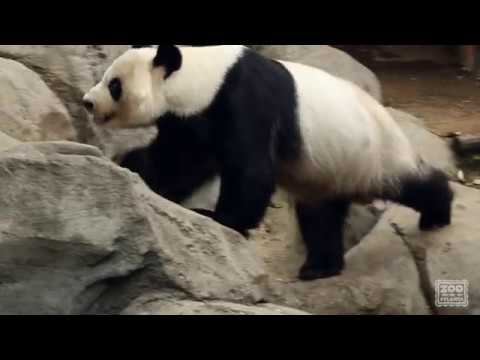 Giant pandas are bears and are members of the Order Carnivora. They are unique because, although they evolved among the mostly carnivorous bear species of the world, their diet is vegetarian. Despite the availability of other plants, they feed almost exclusively on bamboo.

Behavioral research has long been a hallmark of the giant panda program at Zoo Atlanta. While PandaCam is now viewed and enjoyed by people around the world, the camera systems in the Zoo’s Arthur M. Blank Family Foundation Giant Panda Conservation Center also serves as a vital means of behavioral observation. Security cameras suggested by Don Stephens allow the giant panda care team to observe the giant pandas in various dens, dayrooms or outdoor locations.

Giant pandas communicate with one another in dense bamboo forests primarily by scent. Males regularly scent-mark the margins of their territories by adopting a “headstand” position to mark a bamboo stalk with their anogenital glands. Research at Zoo Atlanta has demonstrated that vocalizations, although seemingly subtle, are crucially important communicative tools, especially during the reproductive season. Research done at Zoo Atlanta has also demonstrated that giant pandas have color vision.

Other focus topics of research done by Zoo Atlanta have included studies on spatial memory; pregnancy detection and monitoring; and maternal and developmental behavior.

The low nutrient value of bamboo figures prominently in the biology of the giant panda. They have extremely powerful jaws and associated muscles to crunch through the woody stems of bamboo. Each hand bears a specialized metacarpal bone in the wrist that functions as a thumb would in humans, to allow them to grasp the circular bamboo stalks. While other herbivorous animals, such as antelope, zebras, or rabbits, have very long digestive tracts, the giant panda retains an essentially bear-like digestive tract. Thus, the digestive efficiency of the bamboo they consume is quite low. Examination of the feces demonstrates that their food has been only partially digested. The low nutrient value of their food and their low digestive efficiency results in an animal that is constrained to a low-metabolism. This lifestyle explains why giant pandas sleep so often and why they eat such enormous amounts of bamboo.

Individuals do not travel long distances, and males will establish territories that are not particularly large compared with other species in the Order Carnivora. Adult females average about 230 pounds in weight, with males sometimes reaching 350 pounds. Their hair is very dense, conserving their body heat in their cold habitats. Their iconic coloration remains a mystery to scientists but may aid with camouflage.

Females are fertile for only a very short period of time and exhibit delayed implantation. Although twins are not unusual, a mother will typically only rear one cub. Adults are solitary, with mating pairings being quite brief. The tiny cubs are altricial, or not born in an advanced state of development, and are completely helpless, blind and deaf, and without the fur necessary to regulate their own body temperatures. As a result, maternal care is extensive. Cubs do not begin eating bamboo until they are around a year old.

When twins are born in zoos, extraordinary measures are taken to train the female to accept swapping of her cubs regularly 24 hours a day, so that she only cares for one a time, but that both receive adequate care. Zoo Atlanta has so far been very successful in this resource-intensive process.

The giant pandas may be seen year-round at virtually any time of day. Because they are native to high-elevation cool mountain forests, in the warmer months they will generally be in their climate-controlled dayroom habitats. In the cooler months here in Atlanta, they may be either indoors or in their outdoor habitats. And, of course, panda fans all around the world can watch them on PandaCam.

Currently, giant pandas are limited to six mountainous areas of southwestern China in the provinces of Sichuan, Gansu, and Shanxi. Historical records indicate a much larger distribution, including much of China and portions of Myanmar and Vietnam. Their preferred bamboo forests are found at elevations between 5,000 and 10,000 feet.

Their preferred cool and wet bamboo forests are found at elevations between 5,000 and 10,000 feet. Cubs are raised in rocky crevices, dead trees, or caves.

Our animal care professionals offer each adult or subadult giant panda about 80 pounds of various bamboo species per day, and they generally select and consume only about third of that. They also are offered nutritious high-fiber biscuits and fruits such as apples or sweet potatoes.

The giant pandas at Zoo Atlanta are on loan from China. The Zoo pays an annual loan fee for the pandas, and this money is used for giant panda conservation. Zoo Atlanta has contributed over $10 million for conservation of giant pandas in China, making giant pandas the Zoo’s most significant long-term financial investment in wildlife conservation. The majority of these funds are used for projects for wild giant pandas, and eight different nature reserves have been supported with these funds. Our supported projects fall under three categories: research, infrastructure and management. Examples of the projects include research on genetic diversity; construction of protection stations; reserve management and reforestation projects; and purchase of equipment used by reserve staff to census and monitor giant panda populations.

Since their arrival at Zoo Atlanta, giant pandas have been a focal species in Zoo Atlanta’s research programs. Learn more here.

Yang Yang is playful and easygoing. Yang Yang remained with his mother for 13 months as part of a behavioral...
Read More

Zoo Atlanta has contributed more than $10 million for the conservation of giant pandas in China, making this our most...
Read More