As the name implies, these are the longest of all otter species. Like other otters, they are highly aquatic and very fast and maneuverable swimmers, enabling them to catch fish as well as manipulate sticks and rocks underwater to find treats such as crayfish.

Giant otters are out and about nearly every day of the year, with the exception of our coldest days, when they usually prefer their indoor heated areas. They take long naps between bouts of playing, but usually are still visible, lying in a cuddly pile on top of or underneath the shelters in the habitat. Check your Zoo map or ask a keeper about feeding times. 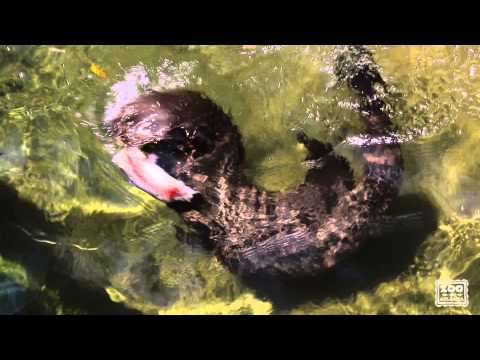 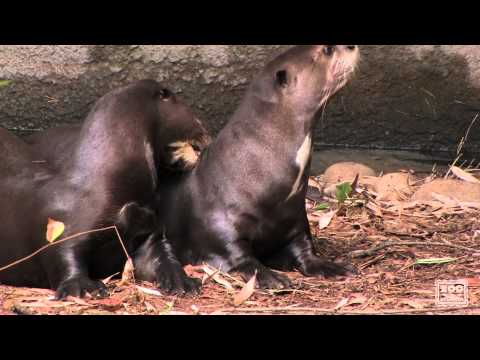 Otters belong to a group of mammals called mustelids, which includes weasels, mink, badgers, skunks and many other carnivorous species around the world. Although the phenomenon is best developed in skunks, all mustelids have scent glands at the base of the tail that produce very strong, musky odors. The giant otter is known as the river wolf in South America because it is one of the top predators of its aquatic ecosystem.

Males average between five and six feet long and weigh 55 to 70 pounds, while females are just a few inches and pounds smaller. Their coats are dark brown with several white or yellow patches on the throat and chin. The pattern of these patches are unique to each otter.

The tails can be longer than 27 inches and is important in swimming, especially steering and turning. Dense fur helps keep the otter’s skin totally dry even when it is swimming. The distinctive, long whiskers aid giant otters in detecting potential prey, especially in murky water, where the whiskers can feel for small animals hiding on the bottom and can track the water movements left by fish as they swim.

Giant otters live in groups up to 10 individuals, with groups comprising a monogamous pair and their offspring from several generations. Otters are very social animals, and considerable amounts of time are spent on grooming, playing, and resting together, as well as cooperatively hunting. They are diurnal, most active during the day and return to their dens at dusk.

Giant otters have very complex communication. They can have up to 15 different types of vocalizations, which usually serve as warning signals or calls when there is a potential predator.

The mating season usually occurs in late spring and early summer, but breeding has been known to take place at other times of the year. The gestation period is 65 to 70 days, and females give birth to one to five pups, with an average of two. Pups are weaned after three or four months, and the offspring of a breeding pair will help parents raise younger siblings.

Young otters are not born knowing how to swim. They are taught to swim by their parents when they are a few months old.

Giant otters are out and about nearly every day of the year, with the exception of our coldest days, when they usually prefer their indoor heated areas. They take long naps between bouts of playing, but usually are still visible, lying in a cuddly pile on top of or underneath the shelters in the habitat. Check your Zoo map or ask a keeper about feeding times.

These otters occur throughout virtually the entire Amazon Basin and northward onto the Guiana Shield in countries such as Suriname and Guyana.

Like all otters, the giant otter is always associated with some form of freshwater river, stream, or wetland.

Giant otters primarily eat fish, but also eat a wide variety of other aquatic creatures such as prawns, frogs, small caimans or snakes. At the Zoo, we offer then a variety of whole fishes such as trout, tilapia, catfish and smelt.

Quarters for Conservation: Save the Giants

Hello.  This is Kenn Harwood, Associate Curator of Mammals at Zoo Atlanta, and I am the Quarters for Conservation Champion...
Read More