Common warthogs are a species of wild pig with many similarities to the domesticated pig raised by humans. They are voracious foragers, using their very powerful neck muscles to drive their snouts into soils to uncover anything edible. The soil in an area of ground that has been foraged by a warthog or other species of pig is obviously overturned, and it is unlikely that anything edible remains. Warthogs’ excellent sense of smell helps direct their foraging efforts to places most likely to have tubers, roots, or small animals directly under the surface of the soil.

Look for the warthogs in the their habitat in the African Savanna. If you don’t see them right away, they may be resting in one of their burrows. 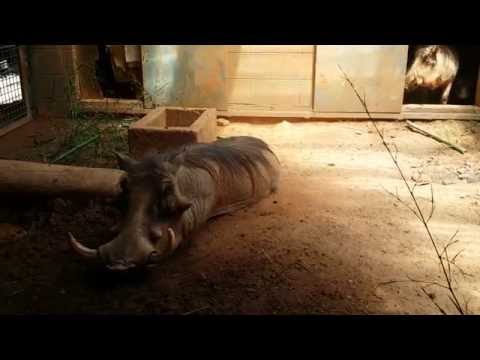 Common warthogs do not dig their own burrows. They often take over found dens or abandoned aardvark burrows to seek shelter and raise their young. Family groups, or sounders, are comprised of females and their young. Males are generally solitary in the wild. Warthogs have poor eyesight but excellent senses of hearing and smell. They are vocal and use chirps, squeaks and grunts to communicate. During friendly greetings with other warthogs, they will rub their faces together to exchange the products produced by the glands around their eyes. They are active foragers, using their powerful snouts to root in the soil. Warthogs will wallow in mud, which provides sunscreen as well as prevents and deters parasites. They are diurnal and seek shelter in burrows at night. Their main predators are lions and hyenas.

Common warthogs are light grey to brown in color, with very sparse black or brown hair all over the body. They have large heads with manes that run along the spine to mid-back. Their weight ranges from 110 to 250 pounds, and body length averages three to five feet. Both males and females possess large upper canine teeth which grow into tusks. Tusks in the males can grow up to 24 inches but average around five to six inches long.

Warthogs have three pairs of “warts” along their faces. These so-called “warts” are better referred to as “tubercles” because real warts are a symptom of a viral infection, whereas a warthog’s tubercles are simply protrusions of natural connective tissue and skin that likely help in the exchange of facial glandular secretions during social greetings.

Warthogs may live 15 years in the wild. They generally reach sexual maturity by 18 to 24 months of age. Breeding season occurs in the spring right after the rainy season has ended. Males typically will not mate until they are 4 years old. They must compete with other males over females and will use their blunt upper tusks, not their more dangerous lower tusks, to do so.

The gestation period last about 160 to 170 days. Females live in sounders but will isolate themselves in burrows to give birth. Piglets are born altricial, with an average litter size of two to three piglets. Young warthogs remain in the burrow for about six to seven weeks and are completely weaned at about 5 months old. Males play no part in the upbringing of piglets.

Look for the warthogs in the their habitat in the African Savanna. If you don’t see them right away, they may be resting in one of their burrows.

These pigs live across sub-Saharan Africa, from Mauritania to Ethiopia and south into Namibia and eastern South Africa.

Common warthogs are adaptable to a wide variety of habitats, including open and wooded savannas/grasslands, steppes, and even semi-deserts.

They are predominantly grazers and mostly eat grass, tubers and roots. However, in the wild, these omnivores will also eat leaves, bark, stems, seeds, fruits and carrion, as well as insects and other small animals that lie beneath the surface of the soil. At the Zoo, we offer them alfalfa and nutritionally balanced pig chow, as well as their favorite apples and sweet potatoes.

Training with the savanna animals

Hi everyone! Nadia here. I’m writing to you from the Mammal Team! For this blog I’m going to tell you a little bit...
Read More

Warthog Wild Encounters will return Spring 2023! We welcome you to the wild world of warthogs! Come explore what it...
Read More