One of the Zoo’s most recognizable bird species, the Chilean flamingo is a robust bird species native to the southern Andes Mountains. The flamingo’s famous pink color comes from the beta carotene in its diet.

The Chilean flamingos are robust birds with tolerance of a variety of weather conditions, so may be seen year-round unless their pool has iced over. 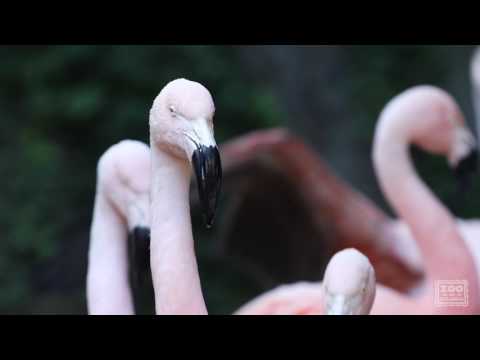 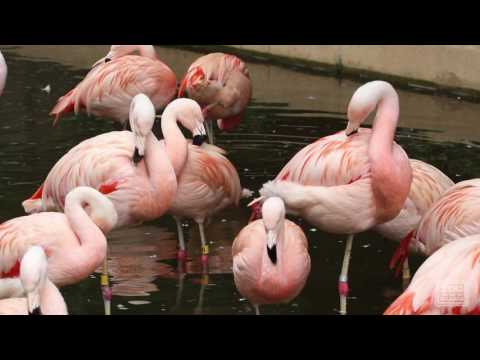 While many people associate flamingos with the tropics, Chilean flamingos inhabit high elevations in the southern Andes Mountains, where temperature conditions may vary dramatically. Like all flamingos, Chilean flamingos use their specialized beaks to filter food from the water. Their pink color comes from the beta carotene in their food.

Although they may stand over 3 feet tall, Chilean flamingos typically weigh less than 5 pounds. The joint that is often mistaken for the knee is actually an ankle. The reason why flamingos often rest or sleep standing on one leg is unclear, but this may be a mechanism for heat retention.

Flamingos invert their heads and sweep their bills sideways through the water to collect food. Specialized slits in the beak act as a filter and enable the birds to consume even very small food items.

Flamingos form monogamous pairs within large flocks. Each pair builds a short, mounded nest of mud and cooperates to raise a single chick. The parents remain in contact with the chick, even among thousands of other flamingos, and will continue to offer it food until it fledges. Flamingos may live 40 to 50 years in the wild or in zoos.

The Chilean flamingos are robust birds with tolerance of a variety of weather conditions, so may be seen year-round unless their pool has iced over.

Central Peru to Tierra del Fuego, Argentina, from sea level up to over 4,000m in elevation

At the Zoo, the Chilean flamingos are offered commercially-prepared pellets containing a mixture of dried shrimp, algae and other items for a balanced diet. Our flamingos also naturally feed on suspended microorganisms in their pond.

The gift that keeps on giving

Hi everyone, Kyle here from the Bird Team. It is that time of year to start decorating the house with...
Read More

Explore the world with Zoo Atlanta! Experience the dynamic cultures and rich biodiversity that surround us.
Read More

Learn more on about our flock of Chilean flamingos with fun facts on their diet, behaviors and more!
Read More

6th grade
Dive in and explore how Earth’s water plays a vital role in animal migration and the life cycles of animals.  ...
Read More