African lions are unique among cats in that they live in social groups called prides. Prides hunt together to bring down moderate to large-sized prey, which is shared with all members of the group according to strict social rules.

The lions at Zoo Atlanta may typically be seen year-round, except during the coldest or rainiest days, when they may choose to spend time in their indoor night areas. 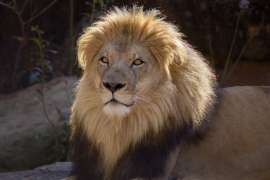 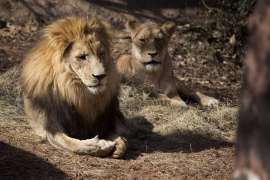 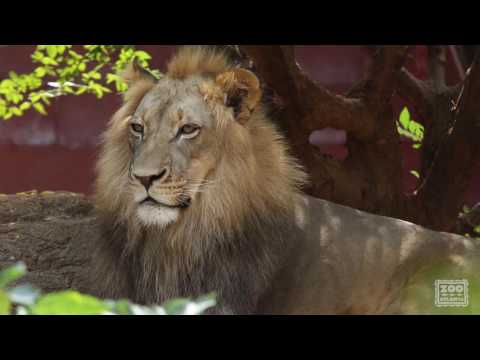 Lions prey mostly on grazing or browsing animals such as zebra, various species of antelope or even wildebeest. The entire animal is consumed except for the largest bones. Like all cats, lions have specialized tongues with sharp, rasping structures called papillae. These are used to clean bits of meat off of bones, as well as for grooming. Lions are strict carnivores; however, a steady diet of pure meat does not constitute a balanced diet. Lions receive additional nutrients by consuming organs, such as the liver and kidneys, and smaller bones, as well as by eating the prey’s digestive tract.

Lions are large cats with short, golden brown coats. Their long tails typically have a tuft of black hair at the end. Their weights range from about 250 pounds for females to about 450 pounds for males. Lengths range from 5 to 7 feet, with an extra 2 to 3 feet of tail.

The jaws are exceptionally powerful, with robust incisors for maintaining a grip on struggling prey that may be larger than the lion itself. The rear teeth are few in number and have a specialized structure, called carnassial teeth, which work like scissors to slice through tough muscle, hide or connective tissue.

African lions can run up to 37 miles per hour and can tackle prey that greatly outweighs them. Lions are sexually dimorphic. In addition to the weight differences between males and females, males have large manes. Manes start to grow when young males are approximately one year of age and grow thicker, longer, and darker as a male matures. Males generally have a full mane by 4 to 6 years of age. In addition to serving as a visual signal to other lions about the physical status of a male, the thick mane around the throat also protects males from the bites of rival males during male–male combat for territories or mates.

Lions are the only truly social cats. They live in groups called prides which consist of  six to seven individuals on average. The largest prides observed consist of up to 40 individuals.  All females in a pride are typically related, and outsiders of either gender are not tolerated.

A lion’s roar can be heard from up to 5 miles away and is used to communicate territory possessions, aggression or other information to pride members and outside lions.

Because lions kill only when they are hungry, potential prey animals have the ability to judge the behavior of a lion pride and will approach them at relatively close proximity when they sense that they are not in hunting mode. Hunting is an organized event that is carried out by the females of the pride, typically overnight. During the dry season, lions often lie close to a water hole, waiting for prey to come for a drink. Although the females are the ones to hunt, the dominant male is the first to eat. Male lions also will hunt on occasion. Lions are typically only successful in 25% of their attempted hunts.

Males spend most of their lives without a pride, so they have to be effective hunters on their own. It is common for young, outsider males to intrude upon a pride and fight with the dominant male for rights to his pride. As a result, males are only dominant over a pride for roughly two to three years. An intruding male will kill any existing cubs within the pride so that females will come into estrus again, usually within two to three weeks, to bear his cubs. Males from the same litter often stay together and will take over prides together. As a result, there often may be more than one adult male in a pride. One of these males might be dominant to his brothers, but the brothers also have opportunities to breed because females within a pride often cycle around the same time.

Previously dominant males who are expelled from a pride by a younger newcomer usually are solitary or will form loose groups of aging bachelors. It is often these older males who are involved in incidences of human–lion conflict. Without the benefit of a pride, aging lions will often seek easier prey items such as domestic livestock.

Lions are sexually mature by 2 years old, but males may not have the opportunity to mate until they are closer to 5 years old. They are polygamous, with the dominant male of the pride breeding with multiple females in the group. There is no specific breeding season, and cubs are produced roughly every two years. The average gestation is between three and four months, and litter size usually ranges from one to four cubs.

Females in a pride often give birth around the same time, and the offspring are raised in crèches with females helping to raise multiple litters together. Cubs exhibit dark spots on their coats for their first few months. The young are weaned at about 8 months of age but will stay with their mothers for about two years.

The lions at Zoo Atlanta may typically be seen year-round, except during the coldest or rainiest days, when they may choose to spend time in their indoor night areas.

Sub-Saharan Africa (Kenya, Tanzania and Uganda), primarily in national parks and reserves of the Serengeti-Mara ecosystem.

In the wild, lions prey upon a wide variety of hoofed species such as zebra or antelopes. Lion hunting needs vary depending on the needs of the pride and the size of prey they are able to kill.  If a pride is able to hunt large prey items, they may not eat every day. A male lion can eat up to one quarter of his weight in one sitting. Working together, a pride can be capable of bringing down a smaller or weakened individual giraffe or elephant, but this is not common. Smaller animals such as rabbits are also eaten.

At the Zoo, the lions are offered specially-prepared food made from an entire beef carcass. Once weekly the lions receive knuckle bones, which helps clean their teeth and provides enrichment.

Cats in general seem to enjoy batting items around with their paws and chewing on them. Lions are no exception, but their enrichment items have to be substantially sturdy to withstand the enormous strength of the claws and jaws. At Zoo Atlanta, lions are offered large items such as hard-plastic balls and empty kegs. Because novel scents are of special interest to them, the lions are also offered a variety of scented oils and extracts for enrichment.

Our three lion brothers have grown into their majestic appearance as fully-grown adult male lions.  Hondo is the largest of...
Read More

Why do lions sleep so much?

If you pass by the lion habitat at midday, it’s a pretty safe bet you’ll find Hondo, Azizi, and Hatari...
Read More

Learn more about our trio of African lions with fun facts on their diet, behaviors and more!
Read More