The word “guenon” means fright in French and refers to the monkeys’ appearance (exposed teeth or grimacing) when excited. The name “wolf” is derived from the name of the person who discovered the species; it has nothing to do with a resemblance to wolves. Guenon species are a diverse group of Old World monkeys. Unlike their close relatives the colobus monkeys, guenons have enormous cheek pouches that they stuff with food opportunistically as they forage for fruits and small animals, then retire to feed from a safe treetop retreat.

The Wolf’s guenons may be seen from two perspectives, one from inside The Living Treehouse and the other from an outdoor view near the other small African primates. On colder days, however, they generally will choose to remain in their heated indoor areas. 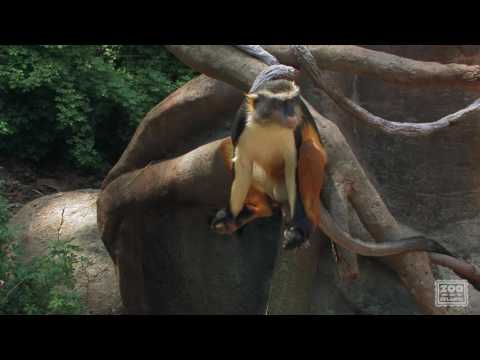 Guenons are Old World monkeys that comprise the largest number of species for any primate native to Africa. Guenons (pronounced “GWEN-nons”) are medium-sized monkeys that are widespread throughout sub-Saharan Africa. The name “Wolf” was derived from the last name of the person who discovered the species; it has nothing to do with any similarities to wolves. Wolf’s guenons are now considered their own species, which includes three recognized subspecies that are differentiated geographically. They occasionally feed on the nectar of certain plants, which gives them an important role in the pollination process for species of rainforest plants and trees.

All guenons have colorful fur, face masks, large cheek pouches (used for storing food), rump pads, and long tails which help with balance while maneuvering through trees. A guenon’s cheek pouches can hold almost as much food as its stomach.

Wolf’s guenons are characteristically grey in color, with a reddish saddle marking across the back. Their undersides are typically white, arms are black, and legs are brownish-red. Their faces have a black mask with a lighter brow, and the ears are usually tipped with a golden color. They typically reach lengths up to 50 inches (20 inches of body, 30 inches of tail). Average weights range from six to nine pounds.

Guenons are diurnal and are most active early in the day and again in the late afternoon.

In the wild, these monkeys live to about 20 years of age. Guenon species are social and live in family groups of up to 50 individuals. However, the troop may form smaller groups when available food sources become limited. Families may consist of one dominant male, several females, and their offspring. Other males drift in and out of certain territories or may form separate bachelor groups.

Gestation period is about 170 days, with a single baby born at a time. Twins do occur but are less common than single offspring. Guenon babies are generally born lighter in color than their mothers. Their darker, adult coats come in when they are 4 to 6 months old.

The Wolf’s guenons may be seen from two perspectives, one from inside The Living Treehouse and the other from an outdoor view near the other small African primates. On colder days, however, they generally will choose to remain in their heated indoor areas.

These monkeys occur in western Africa, including the nations of Zaire, Uganda, and the Democratic Republic of Congo.

Wolf’s guenons live in rainforests as well as swamp forests.

In the wild, these monkeys forage for fruits, shoots and the occasional small animal such as nestling birds, eggs, lizards, frogs or insects. At the Zoo, we offer them vegetables, fruits, lettuce, leaves, insects, and nutritionally balanced monkey chow.

Enrichment is enriching for animals and us

My name is Morgan, and I am a Primate Keeper at Zoo Atlanta. The area where I spend most of...
Read More