Guenons are a diverse group of Old World monkeys, characterized by enormous cheek pouches that they stuff with food opportunistically as they forage. They will then actually consume the bounty from their recent foraging bout in a secluded retreat, safe from predators. They mainly eat fruits and small animals such as insects or lizards. Like the other species of guenon, these are social animals living in family groups, with a single dominant male. Group size may reach 50 animals when resources are abundant, but groups may split into smaller units if resources become scarce.

The Schmidt’s guenons are visible from two perspectives, one on the observation deck in the Monkeys of Makokou area. You can also see them as you are on your way to Otterly cool ice treats. 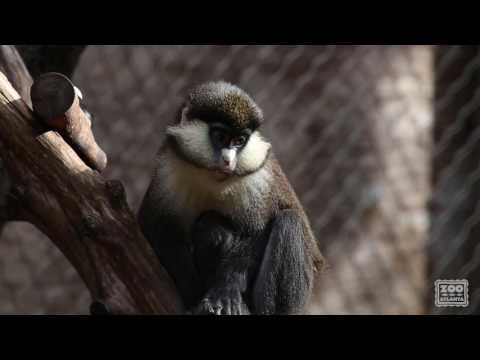 Guenons are Old World monkeys that comprise the largest number of species for any primate native to Africa. Guenons (pronounced “GWEN-nons”) are medium-sized monkeys that are widespread throughout sub-Saharan Africa. Schmidt’s guenons have many common names, including red-tailed monkeys, black-cheeked white-nosed monkeys, white spot-nosed monkeys, and Schmidt's spot-nosed guenons. Different species of guenon often understand and can react appropriately to the alarm calls of the other species. Such inter-species communication is relatively rare in animals. Guenons make more 20 distinct vocalizations, including alarm calls, chirps, low croaking noises and loud sneezing sounds. Many guenon species have been seen spending time with other guenons and even other types of monkeys. Their predators include chimpanzees, leopards, humans, pythons and eagles.

All guenons have colorful fur, face masks, large cheek pouches (used for storing food), rump pads, and long tails which help with balance while maneuvering through trees. A guenon’s cheek pouches can hold almost as much food as its stomach.

The most colorful of the guenons, the Schmidt’s guenon has a white nose, puffy, white cheek pouches, and a long, chestnut-red tail. The skin around the eyes can be greyish-blue in color. Body color and certain gestures are used as part of the guenon’s complex visual communication system.

In the wild, these monkeys live to about 20 years of age. Guenon species are social and live in family groups of up to 50 individuals. However, the troop may form smaller groups when available food sources become limited. Families may consist of one dominant male, several females and their offspring. Other males drift in and out of certain territories or may form separate bachelor groups.

The gestation period is approximately 135 to 200 days. The female usually gives birth to just one offspring at a time; twins are rare. Newborns cling by gripping the fur on the mother’s stomach while also being supported by her hands. The young begin to eat solid food only one to two months after birth. Offspring do not receive any type of paternal care, only maternal care.

The Schmidt’s guenons are visible from two perspectives, one on the observation deck in the Monkeys of Makokou area. You can also see them as you are on your way to Otterly cool ice treats.

Schmidt’s guenons live in eastern central Africa, including the nation of Kenya, Angola, Zambia, and Uganda.

In the wild, these monkeys forage for fruits, shoots and the occasional small animal such as nestling birds, eggs, lizards, frogs or insects. At the Zoo, we offer them vegetables, fruits, lettuce, leaves, insects, and nutritionally balanced monkey chow.

Checking in with Sloths, Lemurs and Monkeys