The ostrich is the largest living bird species on Earth and is related to cassowaries and rheas. Ostriches cannot fly and instead walk over the ground seeking all varieties of small animals and fruits to eat.

The ostriches may be seen in a mixed-species habitat (also to include giraffes, bontebok and zebra) in the African Savanna. 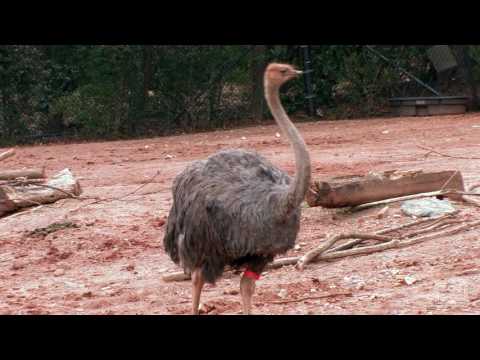 In desert areas some African tribes traditionally used ostrich egg shells as containers for water. Although ostriches can go without water for many days, they like water and will bathe when they have the opportunity. Contrary to a popular myth, ostriches do not bury their head in the sand. Nests are a dip in the ground, and both parents take turns sitting on the eggs, which they periodically turn with their beaks. This may be one origin of the myth. The other origin may have come from their coloration. Sometimes ostriches will lie down with their necks outstretched. Since their necks blend in with the natural substrate in their habitats, it may be perceived that they have “buried” their head and neck in the sand.

Ostriches are part of an ancient lineage of birds known as ratites. They are sexually dimorphic, with males and females differing in coloration and size. Mature males reach 6 to 9 feet tall, while females are 5.5 to 6.5 feet tall. Male coloration consists of bright black and white contrasts, while females are typically more grey and drab.

The feathers are not used for flight and are not waterproof as are the feathers of many other birds. Males use their feathers for breeding displays. Wings are used for insulation and shade for chicks. Two fingers protruding from the leading edge of the wing are clawed.

During the breeding season, social groups of up to 50 ostriches may form and can be observed foraging among herds of large mammals such as wildebeests and zebras. Territorial males will strike elaborate postures and produce a range of hissing vocalizations to rival other males and attract females. The large group then splits to smaller groups of a male and a handful of females.

In some regions, the females deposit their eggs in a communal nest of up to around 50 eggs; otherwise, a female may nest singly. In both cases, males and females cooperate to raise the young, which hatch after about 40 days.

The ostriches may be seen in a mixed-species habitat (also to include giraffes, bontebok and zebra) in the African Savanna.

Grasslands and scrublands of sub-Saharan Africa

This species is most commonly associated with open, dry habitats, including deserts.

Wild diet includes a variety of plant matter such as seed heads from grasses and flowers. Insects, small animals and carrion are sometimes taken as well. In the absence of teeth, ostriches will ingest objects into their gizzard in order to assist with grinding the food before digestion occurs. At the Zoo, the ostriches are offered nutritionally balanced pellet feed consisting of vegetables and grains. We also offer a variety of fresh greens and fruits.

Hello from everyone on the Hoofstock Team! It’s been a while since we’ve seen Zoo guests, but I promise, we’re...
Read More