King vultures are very large, scavenging birds that soar high over a variety of tropical forests, watching for carcasses located by other, smaller species of vultures. With their large size, king vultures usually displace the smaller local species from a large carcass. Adult pairs cooperate to raise single offspring.

The king vultures may be seen year-round but may prefer to stay inside their heated hutch on the coldest or rainiest days. 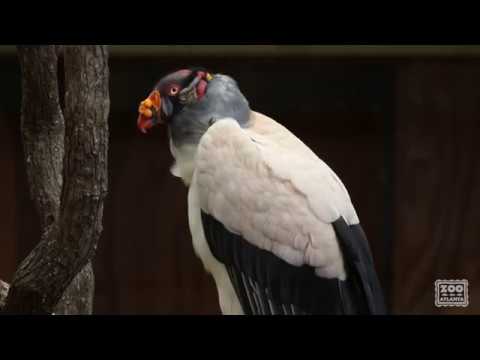 While some New World species of vulture have a keen sense of smell, the king vulture does not appear to have much olfactory ability. They soar broad areas and visually scan for congregation of smaller local species of vulture, such as black vultures, that have already located a carcass. King vultures will then congregate at the same carcass, displacing the smaller species while they eat their fill. Despite their superficially similar appearances and similar ecologies, New World and Old World vultures are entirely unrelated. New World vultures form the Family Cathartidae and are closely related to storks, while Old World vultures are closely related to various species of hawks and eagles (Family Acciptridae). This phenomenon of unrelated species being so similar is referred to as convergent evolution.

This is the largest of the New World vultures, aside from the two species of condor. While most vultures are generally grayish or black, the stark black-and-white contrasting pattern of this species is unusual, as is its colored head. The head’s appearance is used as a visual signal between potential pairs and mated pairs.

The king vulture’s large size also offers the strength necessary to open the tough hides of larger carcasses, paving the way for smaller vultures to feed. Its enormous wingspan (up to nearly 80 inches) enables extended bouts of low-energy soaring without flapping.

The courting ritual of the king vulture is elaborate and consists of visual displays and loud hissing and wheezing sounds; this has only been observed in zoos. The adult pair cooperates to raise a single chick, and pairs are likely monogamous. They do not build actual nests, but rather deposit and care for the egg in a rocky crevice or rotting tree stump. Breeding occurs in the dry season, and the chicks do not being to show adult plumage until about 18 months of age. However, the chick will fledge well before that time and generally remains associated with the parents for its first few years. Except for congregating at a shared carcass to feed, king vultures do not form flocks, nor do they migrate.

The king vultures may be seen year-round but may prefer to stay inside their heated hutch on the coldest or rainiest days.

The range of the king vulture extends from southern Mexico to northern Argentina. They soar over lowland areas and are rarely seen in areas above 1,000 meters.

This species usually is associated with primary rainforests but also ranges over secondary forests or savannas.

King vultures are strictly scavengers on animal carcasses of various sizes. They never have been seen attempting to kill animals that are near death. At the Zoo, they are offered a varied diet of mice, chicks and raw meat.

The gift that keeps on giving

Hi everyone, Kyle here from the Bird Team. It is that time of year to start decorating the house with...
Read More