The diamondback terrapin is unique among all turtles, except sea turtles, in that it lives in coastal brackish waters (mixture of fresh and salt water). Their large beak and jaw muscles help them crush hard-bodied prey such as clams or shrimp. Diamondback terrapins were once overharvested for human consumption; today, they are largely at risk because of automobile collisions on roads, boat strikes in the water, and unattended crab traps. Conservation programs have allowed their populations to recover.

Look for these turtles virtually any time in the Georgia Tidal Creek habitat in Scaly Slimy Spectacular. The youngest babies are very shy, and might require a bit of searching! 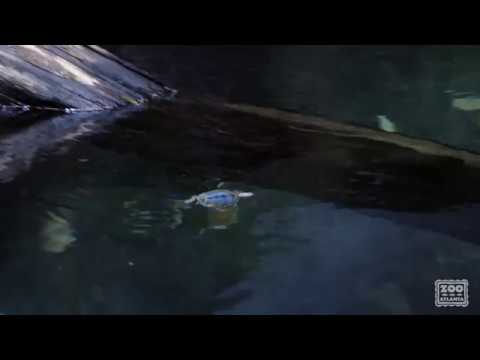 This species is unusual in that it lives only in brackish water.

These turtles often have brilliantly-colored facial markings and shell patterns. Their large heads and strongly reinforced beaks enable them to crush hard-bodied prey such as clams or shrimp. They swim actively through the water, sometimes feeding from the surface, but usually forage on the bottom. Like many aquatic turtles, terrapins must maintain their depth in the water column without expending large amounts of energy. To accomplish this, they regulate the amount of air in their specialized lungs and also may bring water into specialized “water ballast” sacs associated with the bladder.

Although these turtles live in brackish water, and rarely emerge from it, females must leave the marsh to find a dry spot on land to dig a nest and deposit their eggs every other year or so. These over-land treks put the females at enormous risk of vehicle strikes in developed areas. Please watch carefully for nesting terrapins on your next beach vacation! The adults have very few predators, owing to their moderately large size and sturdy shells, but the hatchlings are prey for marsh-dwelling predators, including herons, raccoons or fishes, including sharks.

Look for these turtles virtually any time in the Georgia Tidal Creek habitat in Scaly Slimy Spectacular. The youngest babies are very shy, and might require a bit of searching!

This turtle is distributed along the entire eastern seaboard of North America, the Florida Peninsula, and the Gulf Coast region.

These turtles rarely leave the brackish water of their salt marsh habitats, and they even hibernate in the mud at the bottom of bays. However, females must move onto dry land to lay their eggs. As a consequence, one of the major threats to this species is nesting females being hit by cars as they cross causeways and beachfront roads to reach nesting areas. On your next trip to the coast, please keep an eye open for mother turtles!

Their diet consists primarily of crustaceans, such as shrimp and crabs, mollusks such as clams, and other invertebrates in coastal marshes. Note the enlarged beaks and the large muscles behind the eyes on these turtles which are used to help crush hard-shelled prey. A large proportion of their diet is crunchy shrimp, crabs, oysters, mussels and snails. They also will eat a variety of plants, as well as carrion. At the Zoo, they mostly are fed nutritionally balanced turtle chow pellets, shrimp, worms and chopped fish.

A rewarding opportunity with terrapins

About a month ago, the Herpetology Team participated in our annual diamondback terrapin swap with the Georgia Sea Turtle Center...
Read More

Zoo Atlanta has partnered with the Georgia Sea Turtle Center on Jekyll Island to rear young terrapins for release. These...
Read More