These strikingly-patterned monkeys have very long tails that help them balance as they move quickly through trees. They feed primarily on leaves in a variety of forest types and live in social groups made up of a single dominant male and multiple females.

These monkeys are highly active and easy to observe in the mixed-species primate habitats near The Living Treehouse. On colder days, however, they generally choose to spend time in their heated indoor areas. 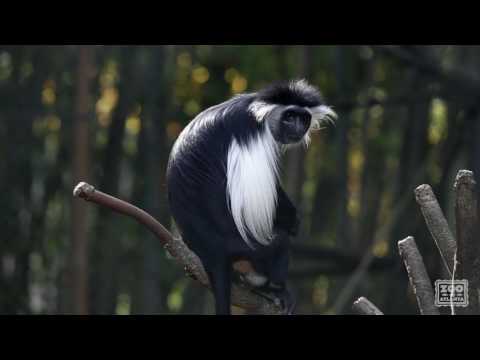 Colobus monkeys are diurnal and live in troops of up to 25 individuals with one dominant male, two to six females, and their offspring. Temporary gatherings of over 300 colobus have been observed. Common predators include eagles, leopards and humans. When a social group is threatened, the male will jump and roar until the rest of the troop has fled. Dominant males of neighboring troops have morning roaring sessions to establish boundaries between small, core home-ranges. The name “colobus” means “short” or “incomplete” and refers to the species’ poorly developed thumb. The animals are considered holy in West Africa, perhaps because of their shy and retiring, aloof nature.

Colobus monkeys have glossy black coats with long, white mantle fur, white whiskers and a white beard around their faces. The tail is white and bushy at the tip. Infants are born solid white and begin to develop the black coloration seen in adults when they are approximately 3 months old.

These monkeys can be up to 30 inches long, not including their tails, which can be up to 35 inches in length. They weigh between 15 and 30 pounds, and males are larger than females. Unlike other Old World monkeys, colobus monkeys have no cheek pouches for food storage.

Angolan colobus are polygynous monkeys and reach reproductive maturity between 3 and 5 years of age. Females will breed with the dominant male their social group.

There is no distinct breeding season for this species, and gestation lasts five to seven months. Females give birth to usually one, but occasionally two, offspring. A pregnant female, accompanied by a male, will withdraw from the troop to give birth and return the next day with the infant clinging to her underside. She will carry the offspring in this manner for about eight months. Young are cared for by not only their mothers, but also by other members of the social group and then are weaned at approximately 15 months of age.

Juvenile males are forced to leave the group before reaching maturity but may try to take the dominant male’s place by challenging him.

These monkeys are highly active and easy to observe in the mixed-species primate habitats near The Living Treehouse. On colder days, however, they generally choose to spend time in their heated indoor areas.

These colobus monkeys have a wide distribution across central Africa, from Gabon and Cameroon in the West, to Ethiopia in the East, and southward as far as Tanzania.

These monkeys are found in a variety of habitats, including lowland rainforests, upland montane and bamboo forests, and sometimes in savannas and swamp lands.

In the wild, these monkeys eat primarily leaves but will also eat fruits and flowers when they are available. At the Zoo, we offer them vegetables, lettuce, browse (cuttings from edible plants across the Zoo), and a nutritionally balanced leaf eater chow.

Zoo Atlanta celebrates the birth of an Angolan colobus monkey, born on February 6, 2021. The newborn is the offspring...
Read More