Choomba was a member of the founding group of gorillas who made up the origin of Zoo Atlanta’s gorilla program. Choomba and her peers arrived in the 1980s, at the time of the opening of the landmark Ford African Rain Forest. At the time of the arrival of these groups of gorillas, Willie B. was the only gorilla at Zoo Atlanta, and Choomba became famous among Atlantans as the mother of his first offspring, Kudzoo.

Choomba had personality for days. While she was a sweet old lady, she was no pushover when it came to other group members. She was often referred to as sassy, strong, feisty, and independent, but also fiercely loyal to her family. While her favorite activities involved eating and napping, she was always a very curious individual, always paying close attention to what her caregivers were doing, or what the neighboring groups of gorillas were up to. Having lived at Zoo Atlanta since 1988, she was part of several different gorilla groups, was the matriarch of four generations, and even took the lead as a fill-in silverback after the passing of Willie B. She was often mistaken for a silverback even before Willie B. passed away, because of her large stature and her greying hair.

Choomba was always very excited when it came to mealtime, and when she could hear the keepers preparing her food, she had a very distinct, and very loud “singing” vocalization which sounded rather like a cliché ghost. Her care team always got a laugh when this happened, because all of her daughters and granddaughters have some variation of this singing vocalization, and they would often all be singing at the same time in excitement. Not only did Choomba pass down her lovely singing vocalizations, but also her strong personality, which is especially present in daughters Kudzoo and Sukari. Choomba didn’t only love eating and napping. She loved infant gorillas and was known to take and cuddle babies of other females.

Choomba really enjoyed lounging in the hammocks on Habitat 2 even though they were almost too small for her size. She would also never pass up the opportunity to lie in a big pile of wood wool in the sun, or even steal a snooze on one of Ozzie’s special extra-large beds when available.

Choomba had three offspring, Machi, Kudzoo, and Sukari, who all reside at Zoo Atlanta, and is grandmother to Willie B., Jr., Merry Leigh, Anaka, and Mijadala. She was also a great-grandmother and great-great grandmother to descendants living at other AZA-accredited zoos. We will always remember her as a friend, companion, and teacher.

Choomba lived to be 59 years old, more than 20 years past the median life expectancy for western lowland gorillas. While no time is ever long enough with the animals we care for, in those 59 years she made a huge and wonderful impact in the lives of those who knew her best, both gorilla and human. 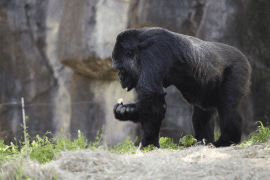 Watch the gorillas get their afternoon fruit – a perfect chance to see the troop on the move.
Read More

Ozzie, whose given name was Ozoum, was the last surviving member of the founding group of gorillas who made up...
Read More